Dialogue on the concept of the Absolute.
Giorgio Griffa, Tomas Rajlich, Nanni Valentini

ABC-ARTE presents the recent gallery programme with a high-quality synthesis of works by the artists Giorgio Griffa, Tomas Rajlich and Nanni Valentini. The affinity between these three major artists lies in the very concept of the Absolute. After a primarily linguistic early period, Rajlich turned to finding a fundamental reason in painting. Valentini too (whose Garze [Gauzes] from 1976 are also a painterly start of reasoning on light) sought to go beyond the strictly formal questions of sculpture to inquire into its ultimate substance, a plastic absolute that recognises its own foundations. And Griffa’s differentiated and modulated repetitions are very close to the conditioned reflex and practical habitude whose roots lie in the very physiology of painting.

Giorgio Griffa was born in Turin in 1936. He is regarded as one of the major protagonists of Abstract Art and one of the most creative exponents of the artistic current "Analytical Painting" or "Pittura Pittura" that emerged at the end of the Sixties. His name is also closely connected with the Italian vanguard of “Arte Povera”. The work exhibited here from 1994 is also published in the book (published by Silvana Editoriale) of the exhibition MAKE IT NEW! Tomas Rajlich and abstract art in Italy held in Museo di Arte Contemporanea Villa Croce in Genoa, where works by Rajlich have been in dialogue with thirty important postwar Italian artists. The big work Obliquo 1975 is in blue, one of the favourite colours of the artist and considered an iconic colour for his works from the Seventies, as will be evident in his solo exhibition to be held in the Centre Georges Pompidou in Paris in March 2022.

Our booth presents an important selection of five small paintings published in the book Tomas Rajlich 100 Small Paintings. Curated by Luuk Hoogewerf (who co-curated the 2018 Rajlich solo exhibition at Boijmans Van Beuningen Museum in Rotterdam) with the contribution of Tomas Rajlich himself and published by Kant, the book introduces the general public to the fifty-year career of Tomas Rajlich with paintings from 1966 to 2018 personally chosen and archived over the years by the artist himself.

Valentini is recognised as one of the most important Italian ceramic sculptors. In the late 1950s one of his collaborations was with Lucio Fontana on the monumental Melandri Tomb in Faenza. He won the Faenza Award in 1956, 1961 and 1977, and the prize of the Syracuse Museum of Fine Arts in 1958. This was the period in which he moved among a large and lively intellectual circle, from Tancredi to Scanavino, from Arnaldo and Giò Pomodoro to Sottsass.

After the important solo exhibition in the Italian pavilion at the Venice Biennale in 1982, and a solo exhibition at the Contemporary Art Pavilion (PAC) in Milan in 1984, Valentini prematurely passed away in 1985.

Here in Art Cologne we have a representative selection of his research: the installation sculptures exhibited in 1984 at the PAC; such sculptures as La Casa di Arianna (The house of Arianna), the real core of his sculptural and symbolic poetry; and the series of Trasparenze, his painterly works on pigmented gauze. An important volume entirely dedicated to Valentini’s Trasparenze will soon be published by Silvana Editoriale. 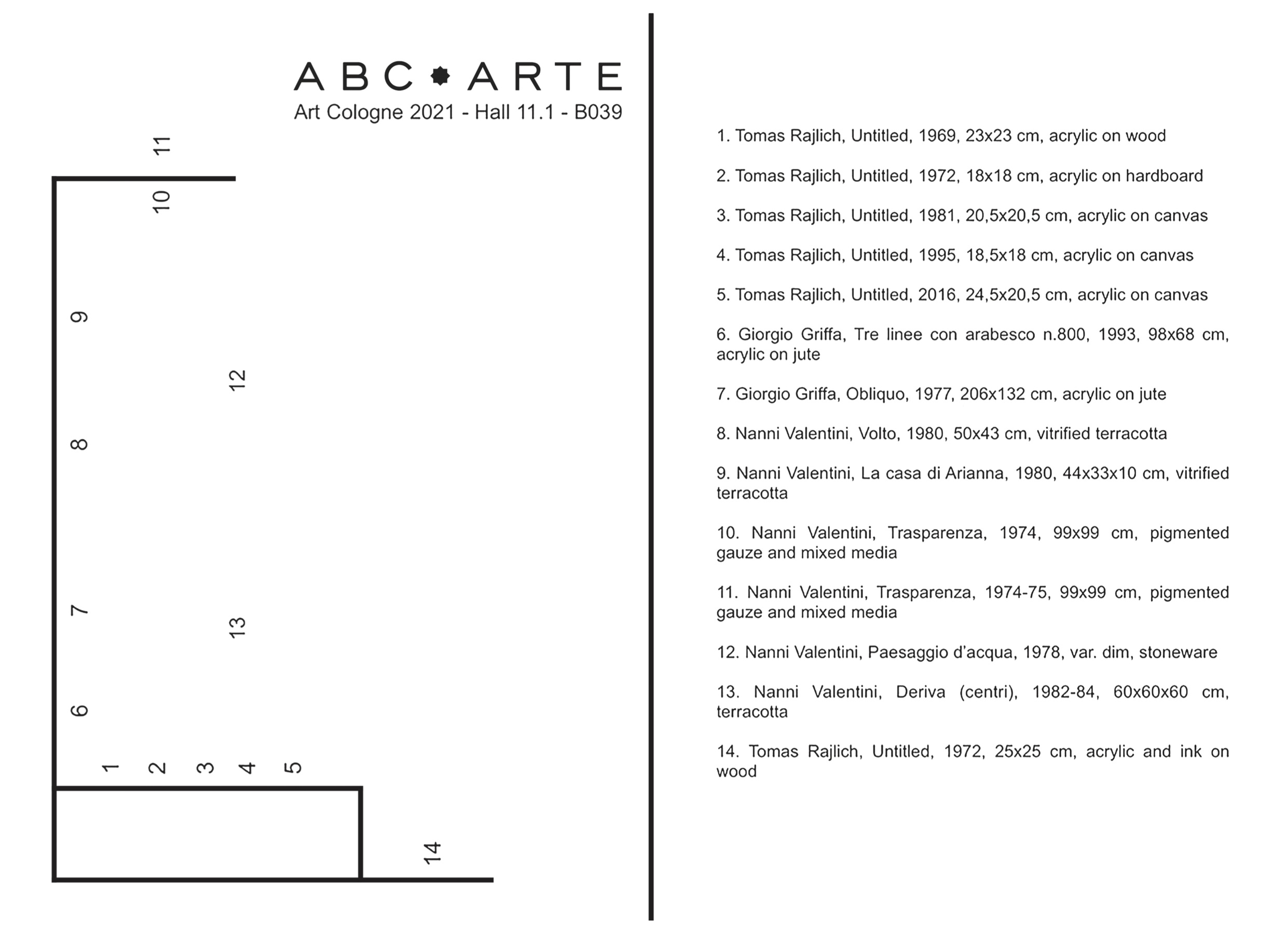